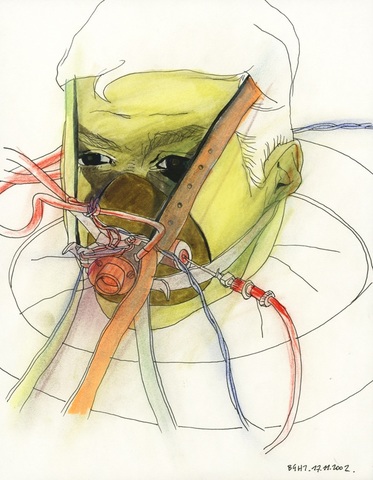 The work of Anne-Mie van Kerckhoven (AMVK) arises from graphical notes, drawings, in which she captures her streams of thought. For her, drawing shapes meaning and it ensures that one can simplify observations and make them manageable. The drawings are elegant and dynamic. They testify to frailty, suffering and fearful visions.

The artist speaks primarily with images, highly condensed images that do not immediately reveal their meaning. She often combines her drawings with text in captions or titles. The language-image associations force the viewer to reflect on the existing conventions. The trip up and questioning conventions is a leitmotif in the work of AMVK. Recurring themes are the relationship between man and animal, between intelligence and intuition, between human creativity and artificial intelligence.

AMVK brings the most diverse elements into new wholes meaning. They used images from her privacy, images from her memory and images from the surrounding culture. This combines them with references to archetypal elements of numerical or color symbolism and the world of gods, but even so she borrows aspects of the latest scientific research, including into artificial intelligence. From these very diverse elements AMVK creates her highly personal language, in which she combines the knowledge of science with critical findings about gender roles and other mechanisms of power in society.

The artist focuses her work mainly on an exploration of the feminine. Images and texts about women are the most dominant in her work.

The female body is a constant. She herself puts it this way: "I use the female figure specifically as a metaphor for what the world does to the people, for our culture, for us." With her strong, confident woman images AMVK offers an alternative view to the traditional approach feminine, seductive nude. All the negative connotations associated with the female nude, be redirected towards their positive opposites.