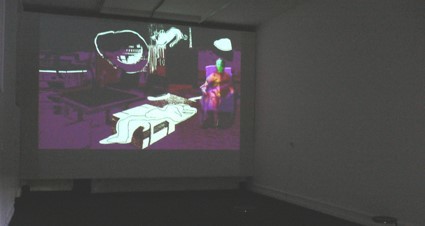 "Statement: The room is an activated space  in which the intrinsic logic must develop an instant dialogue with the cognitive possibilities of the willing artconceiver. I adress the artconceiver who is willing to open to another kind of relation with given and not given information on the spot.

Accepting also the frustration of not being able to recieve all the answers , accepting the coincidentical optical events, completing it with the personal knowledge of what the work contains in image as in theoretical content.

The initial idea was to build a virtual projected room whereof the aspect changes when certain areas of the real space in front of the image are being touched by the physical presence of a visitor. I related the idea to the philosophical theories of pragmatism, in particular with those of Richard Rorty. I got inspired some years ago by the content and the title of a book bundling 3 of his philosophical essays. The book is called: " Solidarity or objectivity. " (1990)  Rorty states that the modern westerner has 2 possibilities to deal with the world today: or you stay an observer, relativating what happens around you, staying aloof, or you become inexorable solidair with everything that is alive, a solidarity, not inspired by religious or moral standards, but by an overall feeling of commitment. (In general Richard Rorty is convinced that knowledge isn't a mirror but an instrument with which we give form and content to our reality. He works about meaning and game, he says that to have a meaning is the same as to have a place in a language game. To Rorty philosophy is a neurotic activity. )

The image of the installation is an adapted modernistic american interior with the word Rorty; a woman in an armchair looks at you. The woman is I, AMVK, in the New York Chelsea Hotel anno 1979, which is the year when Richard Rorty released his controversial book " Philosophy and the mirror of nature " . At that time I was a baby-artist looking for connections between art, science, philosophy and logic. I just became convinced that future stands to logic, as art stands to science. When I digested Wittgenstein and Sade, I started to swallow every information related to cosmology, space travel, moral idiomomoly and modes of arthistory.

The final building of the installation is inspired by a  ritual called " The law of the trapezoid" ( found in the book: The satanic rituals, A.S. Lavey, Los Angeles, 1966 ) in which a room is activated electrically with intent to execute a ritual for enhancing the willpower of the attendants."

=  evolution in numbers from 1 till 19. 19  = number of the philosophical stone  = place where subtile becomes solid. = spot in time where  idea becomes art, where  lead becomes gold, where negative emotion can transform in light + understanding.

In concrete: 1st layer = 19 different versions of one same basic image. Image-transformations of colors + deformation in accordance to intrinsic meanings of specific numbers. Next layer = virtual room, 19 times occupied by different person/friend. Each of them = linked to certain philosopher/thinker + quote of Argentine poet German Scalona on pragmatism vs.alchemy.  Next layer = 19 times philosophical image overpowered by rhythm in battle with colors. Every time again the anti-strategies of modernistic rule-reduction loose powers in inevitable confrontation with abstract systems of radical negation + refusal.

HeadRoom-installation = alchemist voyage from pragmatism over colorfield into enigmatic black square of suprematism. =  confrontation of human brain with enormity of selfevidence in numbers. = Power of being one, or two, or tree, ... + why this is so + how we can use it, to fight looseness we experience when we confront Big Arbitrarity, called life.

HeadRoom-strategy = loose use of philosophico-religious dogmaticism in confrontation with geometrical interpretation of laws of matter. My question became: how big was influence of American pragmatism on art-evolution from black square of Russian suprematism into American colorfieldpainting. + Is it possible to give life to given question by making artpiece in 19 different parts, every part being equal to each other, in value, and - entertainmentwise- on intellectual = pictorial level?

Procedure = to activate installation-room in such a way that user can withdraw energy from it while adding her/his own strength of will.

By the way... Charles Baudelaire shouts the 2nd half of the 19th century: "Le Satanisme a gagné!” and opens dead-tired the gates for first Modernism. Simulteneously in North America Pragmatism is born, the philosophical doctrine of the New World of which Richard Rorty will become, in 1979, the most extreme beholder.

1915: in Moskow starts Suprematism with The Black Square of Casimir Malewitsch.