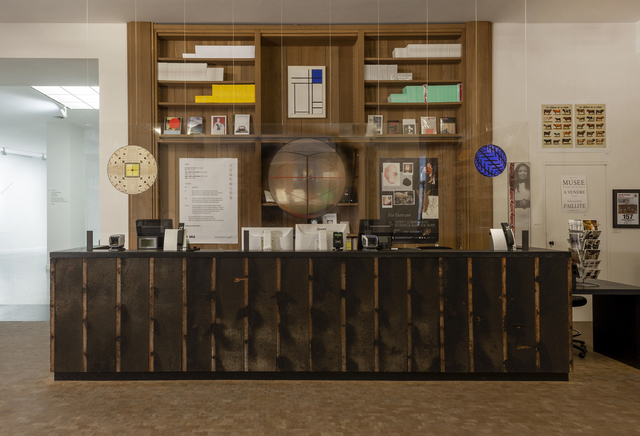 The M HKA asked the Antwerp artist Anne-Mie Van Kerckhoven (b. 1951) to give an artistic interpretation to the required Plexiglas wall at the reception desk. The result is a subtly sensitive presence that eschews the cold, clinical presence that these screens have introduced into our society, while allowing it to be noticeably present.

This artistic intervention finds its origin in a question that has occupied Van Kerckhoven for years; the question of the form of perfection. The square is often seen as an 'ideal' form, precisely because of its equal sides. This also applies to the circle, which refers to the Sun, Earth, and Moon,... but also to innocuous spherical energies called 'orbs' that appear in digital photographs.

Starting from her exploration into the relationship between the square and the circle, Van Kerckhoven began making spheres out of enigmatic square schematics and images. Only a handful of times did this process result in a new image that the artist considered meaningful, as with the present artworks. At the desk of the M HKA, three of them are floating in space.

On the left the recreation of a utopian plan of Jerusalem (1801) by Richard Brothers, from (a book about) 'Alchemy and Mysticism'.
In the middle the Swan nr. 23 (1915), by Hilma Af Klint, from 'Okkultismus und Avantgarde: van Munch bis Mondrian, 1900-1915, Schirn Kunsthalle Frankfurt (1995)'.
On the right an optical experiment from 'Bionics' (1968), by Lucien Gérardin. Incidentally, the image was given the same colour as the work of Marlow Moss in the background.

These three powerful, floating yet autonomous images evoke the possibility of fundamental meaning, change and the relationship between biology and the system: "The distances between the three spheres themselves and between them and the edges of the planes are perfectly attuned to each other. An inexperienced eye can perceive this, an inexperienced eye can feel it. And that creates tranquillity.” – AMVK

This commissioned work has been included in the M HKA collection.