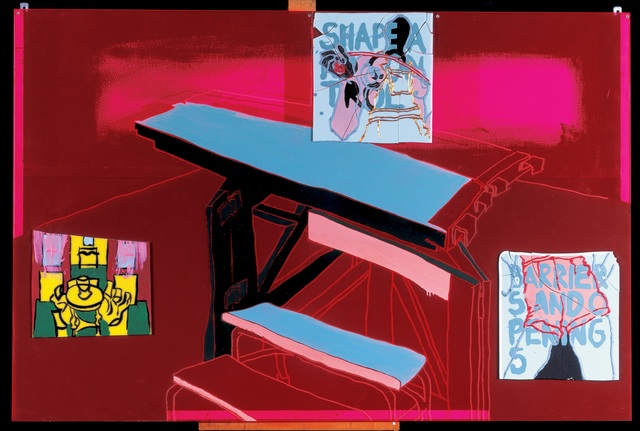 Attributes and Substance was first exhibited as part of the installation “Attributes and Substance” in Amsterdam in 1995. However, the work – as presented here – stands alone, and independently carries this title. The engraving in fluorescing plexi plate is the enlargement of a drawing made by Anne-Mie Van Kerckhoven during an afternoon break while teaching drawing at the Academy for Fine Arts in Ghent. It is a rendering of the ramshackle scaffold upon which the nude model had to take up position during the life drawing class. The yellow plexiglas shard shows an interior containing a plus and a minus. It represents the ambiguous impact that a space has on what happens inside it. Interiors are a recurrent motif in the works of AMVK. The interior – in the sense of the insides of a building – can be a prison for women, one that’s only seen as a ‘decorative element’. Equally, the interior refers to a person’s insides and the inherent potentiality for self-development and fulfillment. The blue pieces of plexi separately show the upper- and lower portions of a masked female figure. With the upper piece is the text “shape and control”, with the lower “barriers and openings”. Both pieces were first smashed to bits, then glued and pasted.

In her work, AMVK underscores the erotic charge of the female body. Aside from the female figure on the blue plexi, the scaffold also refers to a naked female figure: the model. AMVK wants to directly confront viewers with that which the established culture represses or dismisses as taboo. Against these negative associations of ‘femininity’, AMVK places powerful women, conscious of their sexuality and their sensuality. The complex work of AMVK has no single, unequivocal meaning. It is an expression of streams of thought; different experiences, ideas and memories of the artist are laid upon each other like transparencies. With the combination of strong images and words lifted from their everyday context, she invites the viewer to share in creating new meanings.

"Engraving/collage in and with Plexiglass mounted on a painted wooden box: the enlargement of the drawing is the improvised scaffold on which the life model in my drawing class at KASK Ghent had to pose. On top of that I glued 2 bourgeois interiors and the distorted image of female figures in 2 pieces: the upper part says  "shape and control", the lower part: "barriers and openings"."