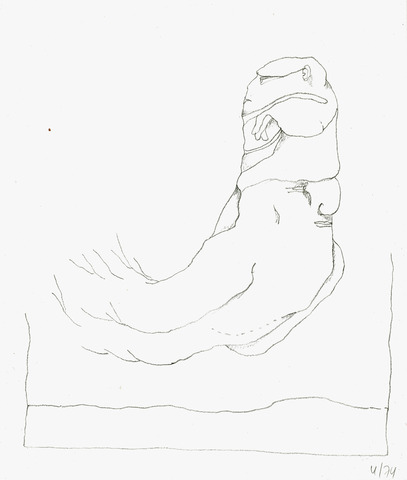 The work of Anne-Mie van Kerckhoven (AMVK) originates from graphic notes, drawings where she lays down her streams of thought. For her, drawing is a form of intelligence, it helps simplify perceptions and make them more governable. The drawings are elegant and dynamic. They testify to vulnerability, suffering and fearful visions. The artist speaks primarily with images, strong condensed images, which do not reveal their meaning at first sight. She often combines her drawings with text, in captions or in titles. The language-image associations oblige the viewer to reflect upon current conventions. The tripping up and questioning of conventions is a leitmotif in the work of AMVK.

Recurring themes are the relationship between humans and animals, between intelligence and intuition, between human creativity and artificial intelligence. AMVK brings the most wide-ranging of disparate elements to meaningful wholes. She uses images drawn from her personal life, from her imagination and the visual culture surrounding us all. These she combines with references to archetypical elements from number- and color symbolism and the world of the gods, while also borrowing from aspects of cutting-edge scientific research like artificial intelligence. From out of this great diversity of elements, AMVK creates her own highly personal language, where she combines acquired scientific knowledge with critical findings concerning role patterns and other societal power mechanisms.

The artist primarily focuses on an exploration of women’s issues. Images and texts related to this subject area are the most dominant in her work. The female body is a constant. She puts it as follows: ‘I use the female figure specifically as metaphor for what the world does to people, to our culture, to our being.’ With her powerful, assertive images of women, AMVK presents an alternative vision to the traditional approach featuring the seductive female nude. All negative connotations, bound to the female nude, are redirected towards their positive polar opposite.