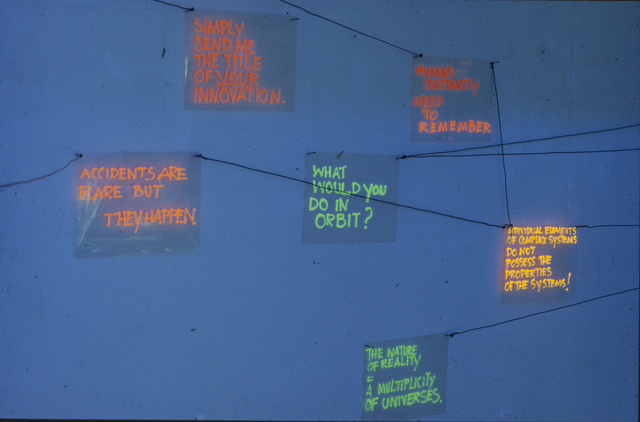 "This is an installation made of pieces of PVC and Plexiglas that I found in the waste container of the factory where I worked from the late 1970s to the mid 1980s. I painted abstract symbols and idioms on them, fragments of science and human signs. The painted things hung in a plastic spiral in the middle of the room. The texts on the wall that I connected to each other in a criss-cross fashion by means of electricity wire seemed to float in space because I used black light. My first computer animation I made a few years earlier, in BASIC, which was one of the first consumer computer languages. So I chose = Basic as a title."

"I worked on Plexiglas and PVC because it was a societal trend in the 1970s to reject plastic, since it didn't perish. For me, plastic seemed to be the ideal medium to make art, precisely because of its perpetuity. I’ve always loved plastic, and I used it in an urge to make beautiful things. Yet I made things other people sometimes found ugly. There’s anger and a kind of protest in these works. I use signs that bear the future within themselves, I use new ways of thinking and representing, things which are autonomous. The notions of shape and colour, as separate entities, are being replaced. This is the beginning of a research on information."

"I lay thin plastic on the floor and pour yellow-fluorescent water on it, it is slightly radio-active (not harmless). I hang 21 texts on the wall on different heights, fluorescent on transparent plexi, clear in what they stand for. The texts are combined by the use of thin, black electricity- wires. The combinations are made on the spot (my thoughts and interests of that very moment). There hangs a spiral for formed by a large thick sheet of plastic, in there 17 plexi-works of irregular shapes, and new as well as older images on them. It is quite possible to walk in but not out. It is necessary to walk through the water, and difficult to see a thing through the thick plastic. The lights are 4 black lights and 1 TL under the plastic. On the opening-night disturbing but aesthetically acceptable music is played. The whole has a feeling of walking into a power-field. To enter an idea."

This is the start of an investigation towards information. In how far science has influenced our future -- and in the future? In how far logics will play a role in this.

Practical use of “logics” leads to gain of time through passing over predictable processes. It is very positive to say things which one never could have thought. This means that the evolution of your way of thinking - goes on outside you without consciousness or personal intervention - certain circumstances become defining for immediate train of thought. An image only calls 1x certain thought  -- sometimes an image calls the memory to that thought. Associations on 1 bit of time -- in relation to an image are unique. Everything has to be made so that the continuance is in it -- and so that it is never finished."