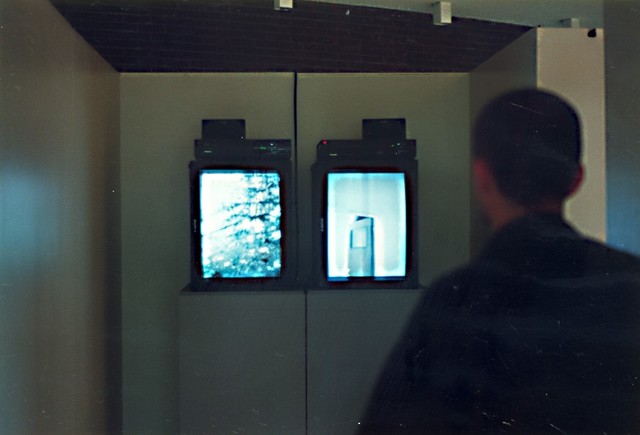 "During the summer of 1992 I was invited with 18 other artists from Europe and America by the cultural centre “De Warande” in Turnhout (B). It was an exhibition project took art and culture in a provincial town as a departing point. The idea was to work in situ with anything the town had to offer from people, culture, the view of the streets, highlights, etc. Afterwards the realized works were to be exhibitted. We could use all the equipment from “De Warande”, we ate and slept for 10 days on location.

Because I had been at boarding school at the Heilig Graf Institute in Turnhout from when I was 15 until 18 it was fairly obvious I was going to do something about that. I decided to ask if I could make video recordings inside. It was school holiday anyway and who knows, maybe I could walk again with my camera alone through the old classes and hallways.

After waiting for a long time I could finally meet the main prioress who allowed me to film. I was also invited for a tour of the closed section of the cloister, of which the school was part of. This surprised me, because at the time this was strictly forbidden; that part was only accessible for the nuns and priests, nobody knew what was to be found behind the doors mentioned LOCK. Now I could see that, mirrored on the right side of the building with the school, to the left side there was an identical, until then for me secret part, existed. With very long, quiet hallways, beautiful gardens and artworks and a wonderful, old library.

I decided to make two different videotapes, one each for every part of the cloister: right for the school and left for the rooms of the real cloister. I turned my camera on quarter so I could put the screens on their sides against each other, in a mirror way, like the structure of the building."