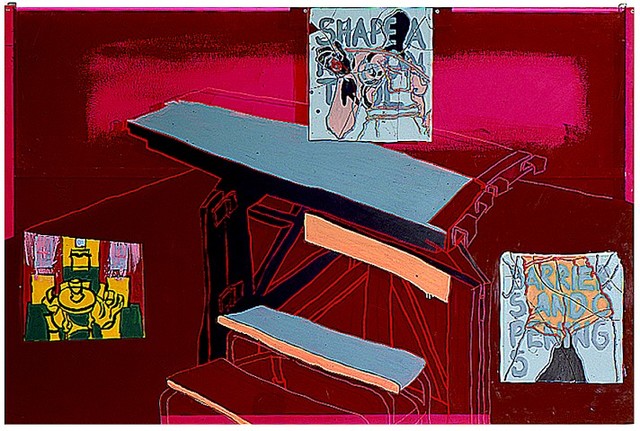 "This work was first exhibited as part of the installation "Attributen en Substantie" (Attributes and Substance) in Amsterdam in 1995. However, it is a work in its own right and it also has the same name separately.

The engraving on a fluorescent Plexiglas plate is an enlargement of a drawing that I made on a lunch break when I was a drawing teacher at the Academy of Fine Arts in Ghent. It depicts the rickety, improvised platform on which the nude model was supposed to pose during my classes.

On the yellow fragment of Plexiglas, there is an interior with a plus sign and minus sign in it. It depicts the ambiguous impact that a space has on what takes place within it.
The blue pieces of Plexiglas separately display the top and bottom of a masked female figure, the top with the text: "shape and control", the bottom, "barriers and openings". Both pieces were first shattered and then glued and taped back together.

1. Each installation, each work is a survival mechanism, a consequence of a mechanism that plays out in a given period of my time, and consists of a series of entities, which automatically focus on that theme, that gravitate towards it in order to become fixed, logical and controlled in the form of an organically formed whole.

2. The installation deals with topical problems of contemporary artistical survival related to the restoration of impaired functions of the central nervous system. The fundamental principles underlying the work of the brain, which enabled it to function for many years without interruption, today command the interest of experts not only in medicine, biology and science, but in art as well. This is because these principles can be utilized to make survival mechanisms more reliable.