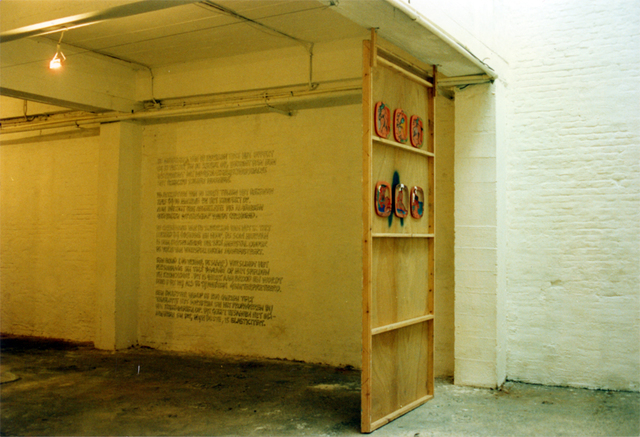 "Belgisch Spleen (Belgian Spleen) (after Le Spleen de Paris by Charles Baudelaire) was initially a Brepols accounting diary for recording cash flows that I had covered in handwritten notes. At a certain point, I started filling a Belgian shopkeeper’s record book with thoughts and reflections that I wrote down between 1978 and 1992. I sorted the notes according to the day of the year, in order to find out whether there were certain times of year when the same types of subjects and ideas re-occurred. Basically, in order to find out whether there could be a sort of system within all that chaos of surging thoughts. And whether there was any evolution in it.

In Parbleu, using second-hand equipment and the help of stand builder Frank, I installed a structure, the walls of which started 30cm above the ground, in which a door was permanently ajar. The footsteps of everyone who slipped through it sideways were amplified and distorted by a delay device that was suspended beneath the grating of the Parbleu drain, just beyond the entrance to the inner installation.

Most of the exhibited works, composed of texts, paint, drawn images and monoprints, were made on plastic plates and dishes that came from my parents’ catering company that had closed. Tabletops from the business, my father's Plexiglas design table and my wooden child's desk were also used as supports. My child’s chair was mounted high up on a wall. Most of the works were autobiographical, made out of different layers of Plexiglas and PVC. The entire thing was an incantation: "Savoir, Oser, Vouloir, Se Taire."  (“Know, Dare, Desire, Be Silent”) which means you need to make things instead of talking about it. It's mainly about the relationship that one has as a city dweller to oneself and one's thoughts, and the kind of extremes that this can lead to.

On the child's desk, that was hanging on the wall in the outer installation, was playing my video film: "Alle Grond weg onder de Voeten. (bezwering van een verhuisdepressie)" (All the Ground beneath your Feet Gone. (A spell for a depression about moving))."