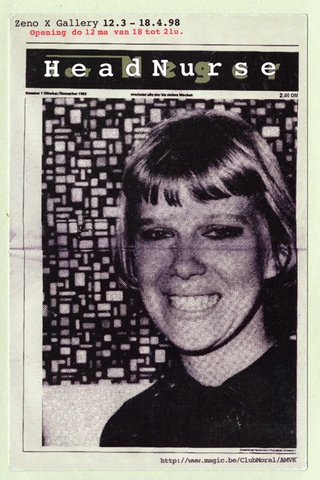 "The exhibition consists, on one hand, of a wooden structure in two parallel layers, parallel to the walls of the gallery, and on the other hand, an interactive computer projection.

We live with two different conceptions of the functioning of our brain: on one hand, we see this brain as divided into right and left hemispheres, with the specific tasks that scientists have ascribed to them. On the other hand, there is a consciousness, an unconscious and a subconscious, according to psychiatrists and psychoanalysts.

I wonder to what extent these two conceptions, or subdivisions, are compatible? Are they in some way connected?

From the wooden structure, I have hung 12 perforated and intact iron plates that sometimes overlap. Like the data structure in computers, subtext, etc. The plates are covered by many parts that are made up of small works, texts, computer prints and “shards” of plastic, aesthetically arranged or otherwise. All of these elements have been given a magnetic layer at the back so that their position is absolute and cannot be altered by anyone who should happen to think they can improve the arrangement. There are three plates that form a separate work, the others are interchangeable or can be supplemented, in terms of information.

As my work has been adapted to the gallery, there is a beginning and an ending plate. And a plate that defines the middle. Those are the three fixed ones. They act as three microcosms amidst all the rest that is on view.

The first one, called Structuren Betogen Niet (Structures Don’t Demonstrate), is created from two portraits from my collection of people I admire: a female Pakistani freedom fighter and Lebed from Russia. More specifically, it is the image of those people that I received from the mass media that intrigues me. Together with my imagination, fragments from the past, present and future, I have made a meaning generating machine out of my fascination with these people.

In the middle is the work Vrije Radicalen (Free Radicals), three magnetically attached collages of female figures, in four pieces, one of which is their head, two, their dress, which is not magnetic and is held in place by the rest, three ,the matching hand and four, a machine, specifically, a satellite, a windmill and a radar.

The latest complete work hangs back at the entrance, and is called Regenereren (Regenerate), which is a further elaboration of the Eclips (Eclipse) idea from a previous installation. Idea, abstraction, perversion and reappropriation.

My starting point was not to apply any kind of systematic organization to the rest of the work that I had made in Zeno X. Nevertheless, this seems to be an unshakeable, compulsive reflex when the moment arrives when things become definitive.

Because the exhibition is a follow-up to the presentation that I exhibited in December 1996 at Kunsthalle Lophem in Bruges, and because the computer animation that was used there was designed as a model for what I aim to create in the coming years, it seemed fairly self-evident to further experiment with the system of division used in that film in this new constellation.

One of my starting points was also to have the animation present at Zeno X, but in the background, like a voice in the background. That is why it has been installed behind a perforated screen, indirectly.

I was able to create the film thanks to my large database of images of women from nudie magazines. Images that fulfil men's desire to see women in varying degrees of undress. Many gestures, expressions, props and camera angles are used here in a stereotypical way. (see text On Women Images). These stereotypes are my triggers towards the unconscious planes of existence of those images themselves. It is at this level that I connect them to other aspects of society as I experience them.

The interactive projection “De sexuele revolutie” (The sexual revolution) is generated directly from a computer. It cuts the exhibition in two, and is screened on a fluorescent sheet measuring 2m by 3m, and is divided into in three. The viewer sees three animations playing independently of one another, that each have their own sound. The films can be stopped individually, and then started up again. When the mouse that controls this is left alone for more than three minutes, the projection will start up again from the beginning. The image was first cut lengthwise in the middle, and then the top section was cut again, in two. In this way, I am trying to depict a personal image of the human brain: in the upper left is the consciousness, the upper right, the unconscious and below, the subconscious. The subconscious is the size of the sum of the other two.

The structure that is revealed in my presentation are five plates that each have their own collage made of four parts, grouped in pairs.

The latter display, on one hand, a picture of a woman undressing and on the other hand, a list of the five parts and the position of the given part of the list. This has been supplemented by a picture of a person in or under a large machine. The list consists of terms for elasticity, caregiver-patient relations, alchemical prophesies, the specific domain that this part of the list refers to *, and a personal interpretation of the relationship between the phenomenon of space travel and cosmetic hygiene for beauty enhancement.

The two small plates display, on one hand, the drawing of a woman in my alchemical order, that I have combined with a modified cover from a nudie magazine.

In the first room, there is also a plate that is composed of 36 female figures on carpet. I took the models from the high-end Italian fashion magazine Collezioni. The absurd tension between the captions and the associated pictures of women inspired me to no end. I also used notable words from the book Fashion and Perversity, a biography of Vivienne Westwood.

All of it comes across as simultaneously self-evident and ridiculous. It is therefore also an homage to Baobo, the obscene pagan goddess without a head who used her nipples to see and her vulva to speak with. With her exuberant dance, she is able to make the depressed and melancholy laugh again.

The exhibition at Zeno X is the elaboration of my first segment, that is, the capacity for internal (invisible) self-organization within an open system.

Of the first 24 women from my 96 images, I created a new interpretation, in colors that express the mental connotation of the associated word. In this way the word ultimately becomes superfluous. The word reverts to a mood. I make the small Plexiglas plates in editions of five at a time.

In each of my next exhibitions, I will color 24 new women, linked to a new part of my list.

Also on display is a six-part self-portrait, and I have reproduced the caring tasks of the head nurse in bold letters on a soft background.

At the very back, in the second room, there is a small interactive piece set up allowing the viewer to click on all 96 black-and-white pictures of women with their respective words. This can also be printed out.

The soundscape is made up of the sound of Morele Herbewapening, recordings of radio frequencies, of contemporary Eastern European radio stations, recordings of Muzak from Hong Kong, and the recording of a humorous Lithuanian radio program from the 1920s.

Piet Mondrian: “This achievement of balance may prepare the way for … the end of (what we call) art.”"