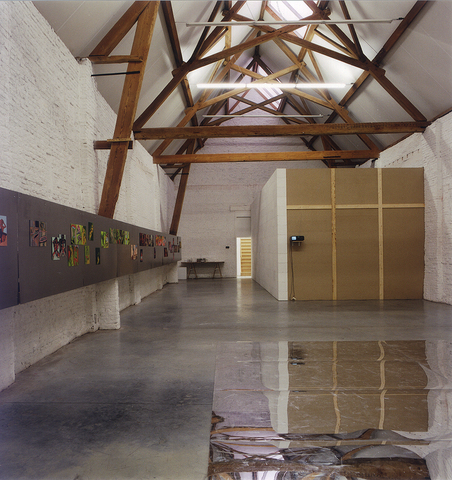 "The entrance door of the exhibition space is divided in dark and bright: up to you to make the choice.

My concept was:  the Kunsthalle Lophem is a giant head divided in 2, the subconscious and the conscious. Behind the middle, on the floor, 12 plexiglass mirrors of 1 by 2 meters, lying there as an ego, special self-reflection.

The installation consisted of a computer animated large screen projection in opposite to the bright side which was partly occupied by a 30 meter iron strip on which 96 magnetic plexiglass and polystyrene plates.

The 30 meter iron strip is made of 12 separate iron plates.

I show 96 women images that are items out of my databank; I connected them with words of texts on the capacity of internal self-organization,  on thermodynamics,  on order in systems in a state of non-equilibrium, on connectionistic networks and on representation of concepts and associations in general.

Behind the mirror, on a black and white stapled floor ( freemasonry), 3 monitors, the dissection of a man’s conversation on easy making money. Title: “Il faut convaincre les investisseurs “, the first sentence of the actual discussion.

The installation is dedicated to Baubo, obscene goddess of the past, looking through her nipples, talking with the vulva, dancing in such a dirty way that all melancholic and depressed women were filled with joy again.

I thought: let’s make an installation to fill everybody, men and women, with joy again, and this by redefining a lot of heavy-duty words, giving people an agreable mental massage.

When leaving the space you come across a small TV-clock with a black and white reminder, an after-image of what’s been shown in the dark."