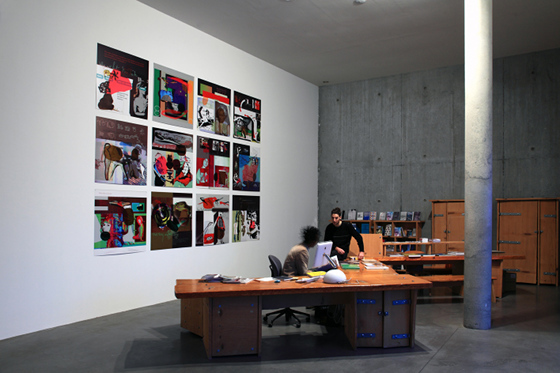 Since the mid-nineteen seventies, Anne-Mie Van Kerckhoven has been building an interdisciplinary body of work that incorporates drawings, texts, sound, videos and computer-generated images. Throughout her exhibitions, the different media are confronted in installations that combine and ‘recontextualize’ older and more recent works. This evolutionary disposition reflects the artist’s fascination with systems and structures.

Anne-Mie Van Kerckhoven has always shown particular attention for the omnipresence of images of women in the media. Some of her works, such as the project HeadNurse, are based on iconography borrowed from ‘softcore’ pornography that she uses to deconstruct the stereotypes related to notions of power and sexuality. More broadly, her working terrain spans the fields of art, science and politics.

In the early nineteen eighties, she became known for her forays into the world of science by becoming involved, along with Dr. Luc Steels, in a laboratory for artificial intelligence research. Her taste for digital technology and the free interaction that she encourages between the brain, the nervous system and machine have earned her a unique place in the world of contemporary art. It has given rise to a heterogenous aesthetic that makes her work difficult to classify.

The Philosophical rooms, which she began in 1998, reappear in a number of projects. These ‘low-tech’ interiors explore the space and imagery created by technology. Each one gives shape to the artist’s apprehension of a philosopher’s ideas. Their visual appearance and composition vary depending on the impact of the theory. Contrary to what one might expect from her use of computers, the work of Anne-Mie Van Kerckhoven is not limited to rationalized, conceptual statements, but is based on her personal experience and, in a single vision, reconciles the collective and the personal.

Although they have underpinned the whole of her artistic practice for the past 30 years, the drawings of Anne-Mie Van Kerckhoven have long been considered as secondary. Their unabashedly impulsive and illogical production gives them the air of a ‘private journal’ documenting her preoccupations. The accumulation of symbols and images, the blend of the abstract and the figurative that characterizes them is reminiscent of the automatic drawing techniques of the Surrealists. Like ‘cadavres exquis’, rebuses or fusions, they offer a view into different levels of consciousness and give free rein to a riotous, uncensored imagination.

While art critics have often categorized Anne-Mie Van Kerckhoven as aligned with the cyber-feminist movement, the nonconformist spirit of her work is rooted in a countercultural critique. The utopian dimension that this entails and the artist’s penchant for technologies and DIY attests to a refusal of standardization, and a desire to probe underlying ideologies. The works themselves deploy a repertoire that is far removed from the aesthetic standards of the post-modern. The saturated, garish compositions and the appropriation of the graphic style of underground comics unquestionably refer to the shift in the 70s/80s from psychedelia to the punk movement. An era in which the artist made a name for herself in the Antwerp alternative scene with the band that she founded together with Danny Devos, Club Moral.