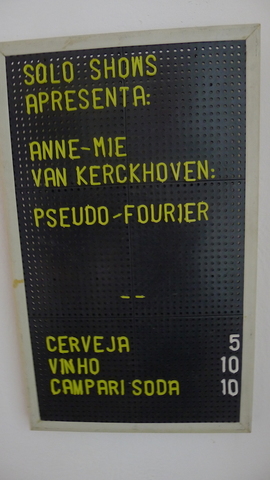 "When I mix old and new works, together with theories and lists that are dear to me, this must be read as an accumulation of testimonies of this private social utopic worldview that is mine.

I name this exhibition Pseudo-Fourier: a list of 17 pseudo-theories, in the tradition of what social utopist François-Marie-Charles Fourier (1772-1837) did in his time. He focused on harmony as on installing pseudo-laws to prevent the older laws to come back. The pseudo-world thus created becomes a positive force that denies the original, the copy, and the model as the reproduction. That positive force can also be called “art”. Lust and analysis are in a constant battle to transgress laws. The art of using transgressions is a major art of harmonious mathematic equations of all sorts. Images can become anarchistic and spread-out circulatory articulators. When I show them in series, as lists, the overall harmony decomposes the function of time into frequencies of creativity, in a way similar to how a musical chord can be expressed as the amplitude or loudness of its constituent notes."